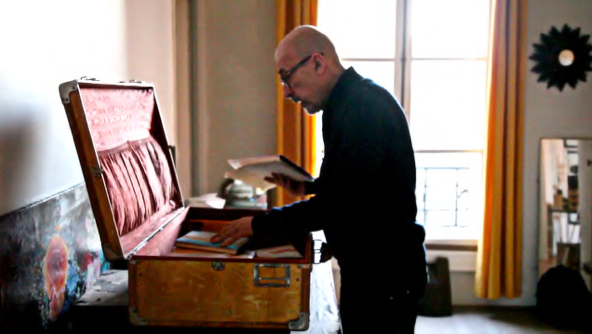 Bernard has just gone into retirement. He is 63 years old, lives alone with two cats and has decided to move into a new house in Lilas, the house where he will live out the last chapter of his life. While he is preparing the boxes, he begins to put everything in order. “What should I leave… what should I bring with me?” Bernard is my master and I am his slave… his last lover. I’ll help him pack the whip in a box among the remains of this memories; memories of his lovers who were torn from his arms because of AIDS, traces of a family who adopted him and then left him, of a strict education that made him, of a father and a mother that he never knew.

Our sex games are an opportunity to bring two generations together: between the crack of a whip and a leather bridle, we speak of love, of death, of AIDS, of his new life project, and of us. The wounds and the funereal baggage of one who has survived, a scream full of life into the light of his sexual urges.